Why We Need Fertilisers 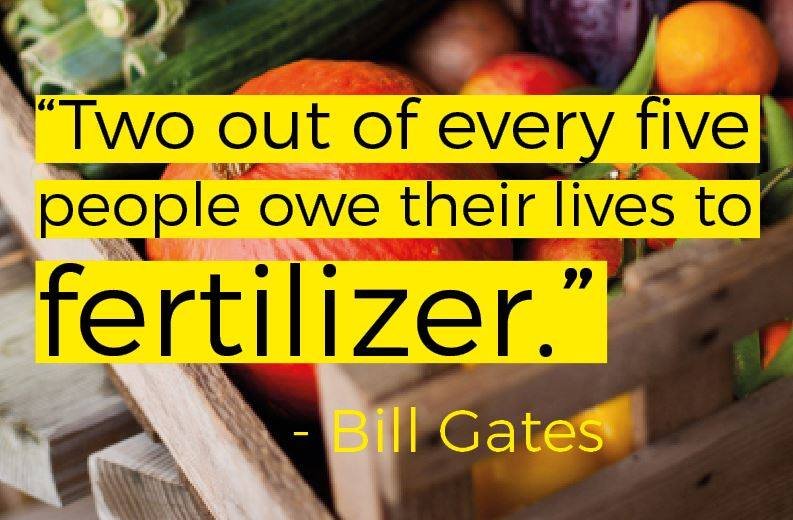 Fertilisers are food for the plants that feed us

Food is as essential for plants as it is for humans, and neither will live without feeding. Food that provides plant nutrition, is called fertiliser, and can be of animal, vegetable or mineral origin. Fertilisers cannot make plants grow, but lack of nutrition will prevent them reaching their full potential. Plant growth is ultimately limited by genetic potential and unlike animals, plants cannot put on weight by ‘over eating’. Plants take nutrients from man-made fertilisers in exactly the same form that occur naturally, but which may not be available in the right amount needed for optimal production from the existing soil or even from the addition of animal or plant manures. 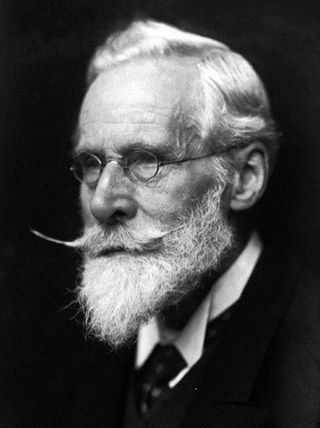 1898 The world cannot feed itself by ‘natural’ means…

Sir William Crookes warned that conventional agriculture could not feed the exploding population without fixing Nitrogen from the air. At the time, natural nitrates and guano were imported from Chile.

Fertiliser use has allowed the world’s population to grow because of the increased food availability. Population growth since 1900, has only been possible without excessive hunger, due to the extensive use of fertilisers.

Apart from natural fisheries, plants provide all the protein (plant or animal) that the world’s population requires. Nitrogen (N), is an essential constituent of all protein, it is naturally created by lightning, forest fires and volcanic eruptions as well as through biological nitrogen fixation in some plants such as legumes. However, it is estimated to amount to not more than around 125 million tonnes of N per year (Erisman, 2009). While this is about the maximum which can be fixed naturally, it is little more than half the actual amount of nitrogen needed by agriculture for today’s protein needs.

In the mid-1990s (Smil 1999) synthetic nitrogen fertilisers were calculated to provide about half of the nitrogen in harvested crops. So roughly 40% of the world’s dietary protein supply has been as a direct result of the Haber-Bosch synthesis of ammonia for nitrogen fertilisers. 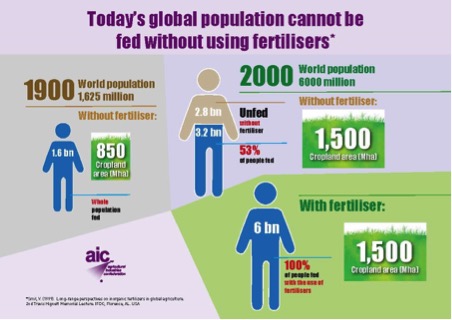 Soil fertility must be maintained

A fertile soil will contain a reasonable and balanced supply of nutrients for a growing crop. Where no crop is harvested, soils can maintain fertility. However, harvested crops will contain nutrients for those who consume the food produced. These nutrients that are removed in crops have to be replaced or the soil becomes less fertile and unproductive. Some nutrients are replenished by recycling manures, etc. where available; otherwise mineral fertilisers have to be used to top up and maintain fertility and optimise the land’s productive potential.

Without fertilisers more farmland – from forests, natural landscapes – would be required

Fertiliser use enables global crop yields to be almost twice what would be possible without them. Thus, producing the same amount of food without fertilisers would need much more land to be farmed. While some African and Latin American countries might expand their cultivated area – albeit with significant loss of tropical forests – worldwide opportunities for more extensive farming are both limited and undesirable. Land change through deforestation for farming is a large source of greenhouse gases and perhaps the greatest source of biodiversity loss. Even if more agricultural land were available, it would not solve the lack of dietary protein which would result if fertiliser nitrogen use ceased.

The world’s poorest farmers have such low-yielding crops primarily because of very low soil low fertility after continuous cropping without sufficient nutrient replacement. Recycling the limited available manures without extra fertiliser is insufficient. Improving the land’s ability to feed the population has been achieved through fertilisers. Globally the number of humans supported per hectare of arable land rose from 1.9 to 4.3 persons between 1908 and 2008 (Erisman, 2009).

Plants take up nutrients in the same form, whether from fertilisers or manures

At the base of the human food chain plants, provide the building blocks for human and animal food. Plants take natural primary elements (eg calcium, nitrogen, phosphorus, potassium etc.), usually in their simplest basic chemical forms, and combine them into the complex organic feedstuffs that we, and farm animals, need. The primary nutrients taken up by plants are in the same chemical forms whether derived from soil reserves, manures or fertilisers. Oxygen and carbon (as carbon dioxide) are taken from the air. Some nitrogen is ‘fixed’ by legumes. Virtually all other nutrients are taken up by roots from soil water and so must be water-soluble to be useful to the plant.

Short video presentation about fertilisers; why we need them and what issues they cause for society.

A perfect storm of global events… why we need fertilisers

A "perfect storm" of food shortages, scarce water and insufficient energy resources threaten to unleash public unrest, cross-border conflicts and mass migration as people flee from the worst-affected regions. By 2030 the world will need to produce 50 per cent more food and energy, together with 30 per cent more available fresh water, whilst mitigating and adapting to climate change.

Assessment of introducing Gatekeeping assurance into the UK

John Kelley and Simon Williams present an assessment of the viability of introducing the "gatekeeper" approach for UK grown combinable crops.

The Agricultural Industries Confederation (AIC) welcomes the release of the National Food Strategy.

Checklist to be used in conjunction with TASCC CoP 2021