The Feed Materials Assurance Scheme (FEMAS) covers all feed ingredients intended for direct feeding to animals or for inclusion in compound feeds and blends. It is based on HACCP principles, a system originally pioneered by space agency NASA, but now forming the bedrock of EU Food and Feed legislation.

FEMAS was originally developed by AB Agri with the intellectual property (IP) being licensed to UKASTA in 2001. UKASTA has since been absorbed into AIC. An annual FEMAS royalty payment is in place to acknowledge this IP.

FEMAS is managed by the FEMAS Working Group which consists of a number of representatives of the various FEMAS sectors, independent consultants and representatives of the AIC executive. This group also reports to the Feed and Food Steering Committee to ensure that the other feed schemes that AIC manage have common objectives.

The scheme is audited and certified by an independent certification body, in accordance with the internationally recognised standard EN45011 (also known as ISO Guide 65). This means that the certification body is itself independently assessed every year to ensure that the standard is implemented and administered consistently and fairly.

Ensuring that the working groups and audit body are robustly managed ensures that FEMAS is remains independent and relevant and is written by the industry for the industry.

The scheme dovetails with UFAS and with the UK livestock assurance (Red Tractor) schemes which the major supermarkets make a requirement for the home-produced livestock products they buy.

FEMAS participants are an extremely diverse group of companies, ranging from specialist additive manufacturers to food processors and brewers. As a result of this, in addition to the FEMAS Core Standard, which applies to all feed ingredient producers, AIC have developed a range of Modules, Sector and Country notes with specific requirements for the varied operations and products encompassed within the scheme.

FEMAS also includes the Intermediate Supplier Standard, a separate “gatekeeper” scheme which allows feed businesses to source non-assured ingredients and take the relevant steps to ensure their safety before trading them on as assured. Each application is considered on an individual basis by an application panel to ensure that use of the gatekeeper scheme does not undermine the principle of source assurance.

Providing safe feed and food is essential to ensure that the risk of a food or feed ‘incident’ is minimised. A complex web of supply chains combine to achieve this and the Agricultural Industries Confederation’s (AIC) feed trade assurance schemes form a vital part of the ’assured chain’ which minimises risk.

The AIC assurance schemes are designed for:

However, many other businesses are eligible to participate including: hauliers, storekeepers, ports, shipping operators, and testing facilities. 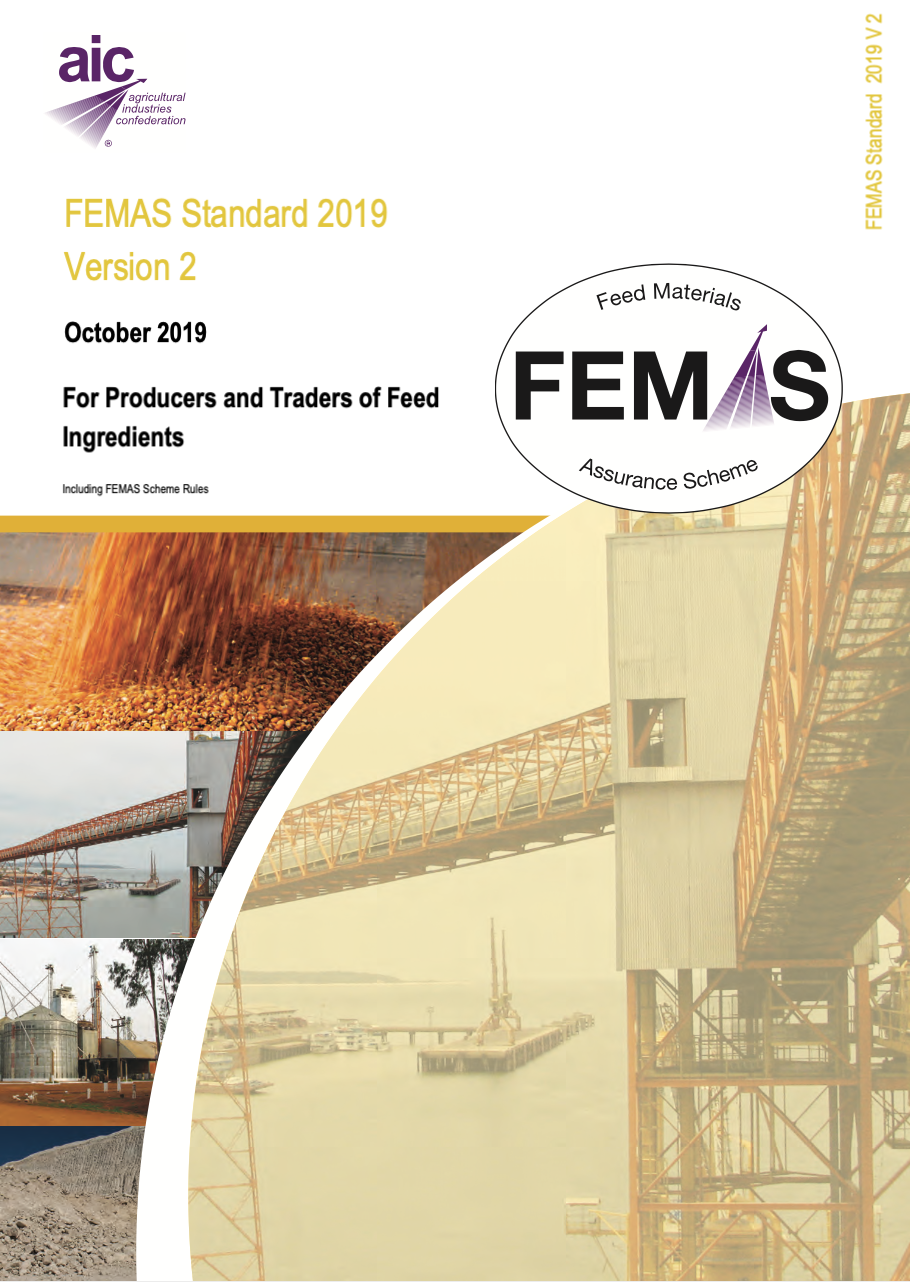 Hazard Analysis and Critical Control Points (HACCP) is a system that was devised to identify, evaluate and control hazards that are significant for food safety.

Summaries and links are provided to EU and UK legislation, guidance and codes of practice controlling the animal feed industry.

Companies involved in the transport and physical loading of dangerous goods are required to appoint a qualified Dangerous Goods Safety Adviser (DGSA). AIC have set up this DGSA register so that a company can make contact with one if they require.

The Application of HACCP Principles

AIC HACCP May 2009 A Practical Guide for the Agri-Food Supply Chain This Guide is designed for use both by companies for whom HACCP may be a completely new concept and also for those companies with prior experience of HACCP. This document has been accepted by the European Commission as part of FEFAC’s EFMC Guide to good practice under the EU Feed Hygiene Regulation

Find out how to join FEMAS

FEMAS is certified by Kiwa Agri Food on behalf of AIC. To apply and for further information on how to join and fees.