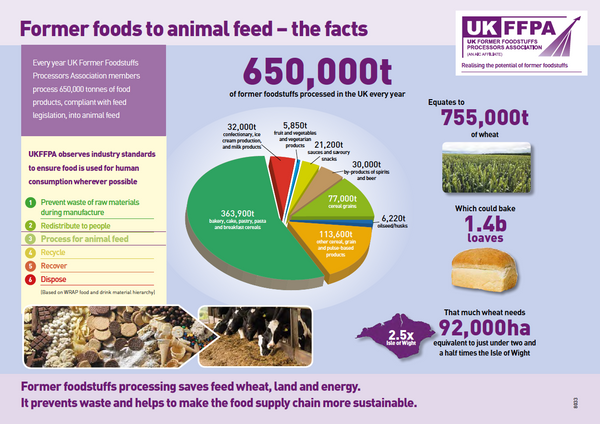 On 2 December 2015, the Commission published the Circular Economy Package. Amongst other things, the Package highlights the importance of processed former foodstuff being used in animal feeds and thereby reducing food waste in Europe. In order to facilitate this objective, the Commission has proposed the exemption of all feed materials, including former foodstuffs, from the scope of the Waste Framework Directive 2008/98/EC.

It is important to note that all feed materials are subject to the very comprehensive EU feed and feed safety legislation, including Regulation 178/2002 on the General Principles of Food and Feed Law, Regulation 882/2004 on official food and feed controls and Regulation 183/2005 on feed hygiene.

In its legal proposal, the Commission proposes to exclude feed materials (including former foodstuffs) placed on the market according to Regulation 767/2009 in the marketing and use of feed from the scope of the Waste Framework Directive. The UKFFPA fully supports this proposal and has advised both Defra and the FSA accordingly.

On 16 April 2018 the Commission Notice “Guidelines for the feed use of food no longer intended for human consumption” was published. The Notice is part of the action plan to reduce food waste and is an integral part of the communication on the Circular Economy. One of the initiatives is, without competing with the sourcing of food banks, to valorise the nutrients of food which is, for commercial reasons or due to problems of manufacturing or certain defects, no longer intended for human consumption, through its safe use in animal nutrition, without compromising animal and public health. Thus, the feed use of such food avoids that these materials are composted, transformed in biogas or disposed of by incineration or landfilling. The distinction between food, animal by-products, feed and waste has evident implications with respect to the legislative framework governing the different kinds of products concerned. These Guidelines are intended to address these issues within the existing legal framework for food and feed

At EU level and on behalf of its Member Associations, the European Former Foodstuffs Processors Association (EFFPA)is working actively with other interested EU Associations to support this legislative proposal. At EU Council level, the Dutch EU Council Presidency (January – June 2016) started discussions on the Circular Economy package with negotiations expected to continue into future presidencies over the next months. It is, however, reported that most Member States support the proposed exemption of all feed materials, including former foodstuffs, from the scope of the Waste Framework Directive. Similarly, work has commenced at European Parliament level with the Environment, Public Health and Food Safety Committee taking the lead and, so far, no modification to the proposed exemption has been put forward. The EFFPA has provided both the EU Council officials and MEPs detailed briefed on the position of processors of former foodstuffs.